The photosensitization phenomenon can be applied to many fields such as that of photocatalysis where light is used to activate a substance, the photocatalyst, which modifies the rate of a chemical reaction without being involved itself in the chemical transformation.Within the numerous areas in which the concept of photosensitization can be applied, the contents here will be related to the biological subject. Thus, photosensitization is the process whereby a molecule activated by light is able to induce photoreactions in the biomolecules present in its environment (see Figure 1). The process is generally associated with the absorption of normal and harmless doses of light by a "strange" molecule (photosensitizer, PS) in non-harmful concentrations, reaching the absorbed energy to the constituents of tissues and cells. In the absence of this substance, the system is not affected by light provided that direct light absorption is not possible. In humans, the eyes and skin are the main receptors of light. In most cases, photosensitized reactions in the skin give rise to adverse side effects. In fact, the photosensitizing deoxyribonucleic acid (DNA) damage by xenobiotics has attracted considerable attention because it can involve a more extended active fraction of the solar spectrum with carcinogenic potential. In that way, the risk of biomolecules damage is considerably increased. However, photosensitization can also be used for therapeutic purposes, what is called photodynamic therapy (PDT).[2]

Photosensitizers are photochemically activated, and there is no direct absorption of light by biomolecules. The light that activates most photosensitizers falls under the UVA range, although there are also some substances whose spectrum of action extends to UVB (see Photoprotection entry for ultraviolet (UV) regions [[1]]). On the other hand, UVA radiation penetrates deeper into the skin and reaches these molecules, which are distributed in the deeper levels of cutaneous tissue. The main source of UVA radiation is the sun, but it is also emitted by artificial light sources, such as tanning lamps and fluorescent lights, the latter to a lesser degree.[3,4]

Sun-induced skin reactions have been increasing in recent decades, due not only to social causes such as tanning, but also to the high number of photosensitizing products commonly used by contact or ingestion, which are found in plants, pharmaceuticals, food additives, chemical fertilizers, dyes, sunscreens, cosmetics, etc. This phenomenon attracts, more and more, the interest of dermatologists, the pharmaceutical industry and legislative bodies involved in the topic. Changing living habits in developed countries leads to a frequent combination of light and chemicals.

Cutaneous photosensitizers may be (a) exogenous, foreign chemicals introduced into the skin by topical or parenteral route, or (b) endogenous, biomolecules (DNA and melanin, for example) in high concentrations or metabolites. Drugs are the major exogenous source of photosensitizing reactions in the skin.[5]

As previously mentioned, the combined action of drugs and sunlight on patients can produce both desired and undesired effects. Thus, PUVA-therapy (psoralens plus UVA-radiation) has long been employed for the treatment of psoriasis, while porphyrins are currently being introduced for the photodynamic therapy of cancer or other diseases. By contrast, there are also a significant number of reports indicating that a variety of drugs can elicit undesired side effects, such as phototoxicity, photoallergy, or photocarcinogenicity.[2,4] Photosensitivity is a broad term used to describe an adverse reaction to light, which may be phototoxic or photoallergic in nature.

In order to anticipate the appearance of photosensitivity side effects, a mechanistic understanding of the involved phenomena is necessary (Figure 2). Absorption of sunlight by drugs leads to their excited states. These can proceed further to afford drug-derived reactive intermediates or, under aerobic conditions, reactive oxygen species. Any of the above short-lived chemical entities may be able to interact with biological substrates (targets), ultimately producing photodamage. Then, extensive changes of biomolecules upon irradiation in the presence of drugs are thought to be responsible for the occurrence of photosensitization side effects.[3]

The photobiological risk associated with the use of drugs depends on environmental and individual factors (climate, height on the sea level, type of skin, etc.). On the other hand, the photosensitizing potential is enhanced in the case of topically administered drugs or when the field of application is dermatology or ophthalmology.In this context, a detailed photophysical and photochemical study of the interaction between excited drugs and key biomolecules such as lipids, proteins, and nucleic acids would be essential for the understanding and prediction of the photosensitization processes. Further efforts along this line are necessary in order to establish structure/activity relationships that may allow predicting the photosensitizing potential of new drug candidates before their introduction in the market.[2,6]

The primary photophysical processes of a photosensitizer are as follows: All chemical photosensitizers, before excitation, exist in their lowest energy state (ground state, S[math]_{0}[/math]). By absorption of a photon, an electron of the sensitizer is promoted to a higher empty molecular orbital (LUMO) without change in the total spin (Wigner's law), giving rise (after processes of vibrational relaxation and interaction with the solvent) to the first excited state S[math]_{1}[/math] that, as the ground state, is singlet. Very few photosensitized reactions occur from this state due to its very short lifetime (≈1-100 ns).The photosensitizer singlet excited state can be deactivated by means of 4 processes, which compete with each other: i) decaying directly to the ground state by emitting heat (by internal conversion of the electronic energy to the vibrational energy, IC); ii) emitting light (fluorescence), Iii) by ionization giving an electron and the radical cation of the photosensitizer or, iv) by intersystem crossing (ISC) with spin inversion, to the lowest triplet excited state, T[math]_{1}[/math].[7] Such processes are shown in Figure 3. 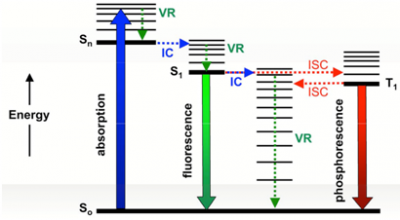 Figure 3. Jablonski diagram for the excitation and deactivation processes that take place after light absorption by a molecule.

The photosensitizer triplet states have much longer lifetimes than the singlet states (from microseconds to milliseconds), favouring bimolecular processes. Therefore, sensitizers in triplet state will suffer a large number of collisions with other molecules (intermolecular reactions such as energy transfer, electronics or chemical reactions), giving rise to photosensitized reactions with high efficiency. By these reasons, this excited state plays an important role in photosensitization. Then, while fluorescence is not an indicator of the photosensitizing potential, the yield in the triplet state formation is.[8]

In this context, triplet-triplet photosensitization (by energy transfer) allows the direct population of the triplet state of a molecule with an intersystem crossing efficiency [math]S_{1}\rightarrow T_{1}[/math] very weak. In addition, they participate in other intramolecular deactivation processes such as phosphorescence emission, intersystem crossing to ground state, ionization and unimolecular reactions, giving free radicals or stable photoproducts. Finally, both the excited and the intermediate radicals can be bound to biomolecules. Any of these routes can induce biological damage, which leads to adverse skin effects. [2,8]

Then, there are two diﬀerent reactions that can modify biomolecules as it is shown in Figure 4. The type I reaction involves a complex chain of events starting by charge transfer to a photosensitizer in a triplet excited state, which, in turn, reacts directly with the substrate in a one-electron transfer reaction. This produces a radical or radical ion in both the sensitizer and the substrate. In the presence of oxygen, these reactions give rise to reactive oxygen species (ROS), such as the superoxide anion radical ([math]O_{2}^{\cdot -}[/math]) and the highly reactive hydroxyl radical (HO[math]^{.}[/math]). Thus, for example DNA single strand breaks and oxidized purine and pyrimidine bases are the indirect consequences of a type I photosensitization mechanism. On the other hand, the main sensitized oxidation reaction to cellular DNA occurs via the type II reaction, which involves direct energy transfer from the photosensitizer in a triplet excited state to an oxygen molecule, leading to singlet oxygen ([math]^{1}O_{2}[/math]) formation and subsequent DNA oxidation.[9]

Whether the reaction proceeds by free radicals or singlet oxygen will depend on the competition between the substrate and the oxygen for the photosensitizer in the triplet excited state. Triplet photosensitizers may also directly decay to the ground state, or be converted to the ground state by means of collisions with certain types of molecules (physical deactivators).

In summary, a good photosensitizer must absorb photons efficiently (high molar extinction coefficient), must have a high quantum yield of triplet formation, and the triplet must have a long life.[3] Ketones are among the best sensitizers, for example. In addition, the photosensitizer triplet excited state, singlet oxygen and most free radicals have relatively short lives, sub-milliseconds, so they must be in the vicinity of the substrate for the reaction to take place. And as a result, DNA damage (which can be highly produced by photosensitization) is considered to be the main cause for the genetic changes responsible for sunlight-induced skin lesions and carcinogenesis, including malignant melanoma.[10]