Bojarski was born on Dec. 25th, 1923 in Działdowo north-central Poland. His schooling was abruptly stopped by the II World War. During the war 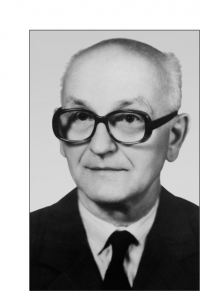 time, he was assigned to forced labor. Right after the war ended he completed his high schooling and become a student of physics (in 1947) at the Department of Mathematics, Physics, and Chemistry of Nicolaus Copernicus University in Toruń in Poland. Although there was a good chance of meeting Professor Aleksander Jabłoński who just started rebuilding his chair of physics there, Bojarski graduated in 1952 in theoretical quantum physics under the supervision of Professor Jerzy Rajski.

From 1952, until his retirement in 1994, Bojarski stayed at the Technical University of Gdańsk and moved through academic ranks obtaining Ph. D. in 1962 at the University of Warsaw and habilitation in 1975 at Polish Academy of Science in Warsaw. In 1980 he was awarded Professor extraordinary and seven years later in 1987, he received the status of Professor ordinarius.

Bojarski's research concerned mainly non-radiative energy transfer and energy migration in solid solutions. His breakthrough work came in 1971, when in a paper with Joachim Domsta published in obscured journal concerning the theory of the influence of concentration on the luminescence of solid solutions.[1] This seminal work led to additional theoretical and experimental studies of concentration quenching and fluorescence depolarization.

In 1984 Bojarski observed [2] that in some situations one has to consider reversible energy transfer from acceptor to donor molecules. He proposed a theoretical model and obtained expressions for quantum yields of donor and acceptor entities. In the next decade, this initial work was greatly advanced by Bojarski and his pupils.[3-5]

Bojarski taught a great number of student courses. He was a lovely person and suportative for his co-workers. He and his group was always a bastion of anti-communism and resistance at Department of Physics at the Technical Univesity of Gdańsk.