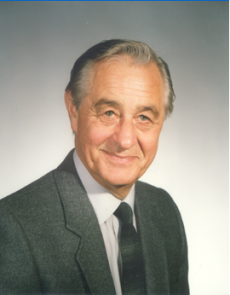 George Porter, (Nobel Prize for Chemistry 1967) was the creator of flash photolysis and a world leader in the study of rapid chemical and biological processes. During his career at Cambridge, Sheffield, The Royal Institution, and Imperial College London he saw time resolution in fast reactions in chemistry and biology improve by 12 orders of magnitude.

George was born on [math]6^{th}[/math] December 1920 in Stainforth, near Doncaster, UK, and was the only child of John Smith Porter, a builder, and Alice Ann, nee Roebuck. George attended Thorne Grammar School (where his father had been chair of the Governing Body), leaving in 1938 to read chemistry at Leeds University, graduating in 1941. In September 1941 he entered service with the Royal Naval Volunteer Reserve, serving in both the Mediterranean and Western Approaches theatres. In 1946, George Porter began his Ph.D. studies with RGW Norrish, FRS, with whom he was to share the Nobel Prize in 1967. The topic of the first work was the methylene radical, detected initially indirectly through the Paneth mirror technique, and thought at the time to be incapable of direct detection because of the short ([math]10^{-3}[/math]s) lifetime. George devised a method, approved of by Norrish and now known as flash photolysis, to detect the electronic absorption spectrum of the intermediate[1]. A second paper, published by Porter alone,[2] showed how these spectra could be recorded at different time delays, thus revealing the kinetics of decay processes, the true flash photolysis methodology.

Porter completed his Ph.D. in Cambridge in 1949, and stayed on as Demonstrator (1949-1952), and Assistant Director of Research in the Department of Physical Chemistry (1954-1956), and as Fellow of Emmanuel College (1952-54) and honorary fellow, 1967. During this time the time resolution of flash photolysis was reduced to microseconds, and Porter’s attention moved towards condensed-phase systems, including the recording of the triplet spectra of aromatic molecules (with Maurice Windsor) in solution.[3]

In 1954 Porter was Assistant Director of the British Rayon Research Association in Wythenshawe, Manchester, before moving to the University of Sheffield as their first Professor of Physical Chemistry. Here microsecond studies on a wide variety of molecules were extensive [4], but the time-scale of experiments was stalled, and did not reduce until Maiman’s development of the ruby laser in 1960. Porter’s group successfully used a Q-switch to the ruby laser, but the real exploitation came upon the move to the Royal Institution of Great Britain in London, where Porter became Director in 1966. He always said his nineteen years in this post were the happiest in his life, and certainly the research flourished, with the timescales progressing from sub-microsecond to nanosecond, and picosecond. The shortening of timescales was not a goal in itself, the research being driven by the need to study primary chemical events such as electron transfer, molecular rearrangements, dissociations and external processes such as energy transfer, molecular motions, diffusion etc which occur on these fast timescales. In his Bakerian lecture of the Royal Society [5] he outlined his work on the Z-scheme for plant photosynthesis, and the individual steps leading to charge separation and water splitting in Photosystem II. Light harvesting mechanisms in chloroplasts and algae were studied and the spatial arrangement of

chromophores in which pigments of decreasing energy levels which funnelled the energy to the reaction centre elucidated. Artificial photosynthesis was also a primary goal of the work during these very productive years. The picosecond time regime is perhaps more remarkable for what cannot be observed than what can. Many physical phenomena were expected to be revealed on the [math]10^{-9}[/math] to [math]10^{-11}[/math]s timescale but were simply too rapid to be recorded, and this drove the development of the next phase of improvement of time-resolution, the femtosecond ([math]10^{-15}[/math]s) regime firstly towards the end of Porter’s time at the Royal Institution, and then at Imperial College[6]. Porter had been elected as President of the Royal Society in 1985, and gave up his Directorship of the Royal Institution at the end of that year. Imperial College London offered him a home as Visiting Professor, firstly in Biology, and later in the Department of Chemistry. He ran a successful research group at Imperial, collaborating with James Barber in Biology/Biochemistry, and seeing two of his best research students David Klug and James Durrant gaining lectureships (now both having Chairs) in Chemistry at Imperial. He was still involved with research at Imperial College upon his death in 2002.

Although primarily known for pump and probe flash photolysis, Porter did make full use of fluorescence decay measurements to complement the transient absorption studies. Thus in the late 1960’s his group was using time-correlated single-photon counting with a spark discharge lamp excitation source enabling nanosecond decay times to be recorded, but the advent of mode-locked lasers with pulse selection either by pulse-picking or cavity-dumping ultimately permitted true picosecond decays to be measured.[7]

In addition to the excellence of his science, Porter will also be remembered for his championing of science in the UK, particularly during his five years as President of the Royal Society, and in the House of Lords, where in his maiden speech in 1991 he advocated with passion the need to support fundamental ‘blue skies’ research. However, one of his greatest contributions was his in promoting the public awareness of science by public lectures including televised programmes. This was begun in Sheffield, greatly amplified in the Royal Institution, and continued to the end of his life. 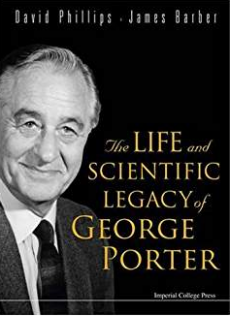 Porter was the recipient of the Corday-Morgan Medal of the UK Chemical Society (now Royal Society of Chemistry); became FRS in 1960; Nobel Prize 1967; was awarded the Sylvanus Thompson Medal of the British Institute or Radiology (1968); Davy Medal of the RS 1971, Rumford Medal, 1978, President 1985, Michael Faraday Medal 1991, Copley Medal 1992; became Sir George Porter in 1972, Baron Porter of Luddenham 1990; Foreign Associate of the National Academy of Sciences, USA, 1974 and Robertson Memorial lecturer, 1978; Kalunga Prize (UNESCO) for the popularisation of science 1977; Bose Medal of Bose Institute, Calcutta, India 1977; Faraday Medal of the Chemical Society, 1980; Longstaff Medal 1981; Freeman and Liveryman of the Salter’s Company, City of London 1891; Melchett Medal of the Institute of Energy, 1987; Porter Medal for Photochemistry (first recipient) 1988; Order of Merit 1989; Society Medal of the Society of Chemical Industry 1991; Ellison-Cliffe Medal of the Royal Society of Medicine, 1991. He held 33 Honorary degrees from UK and overseas Universities; Honorary Fellowships and honorary positions in 51 institutions; and was President or Trustee of 22 organisations; and gave 80+ named invited lectures in Universities worldwide.

[2] Porter, George. "Flash photolysis and spectroscopy. A new method for the study of free radical reactions." In Proceedings of the Royal Society of London A: Mathematical, Physical and Engineering Sciences, vol. 200, no. 1061, pp. 284-300. The Royal Society, 1950.

[4] G.Porter ‘Flash Photolysis and Some of its Applications’(Nobel Lecture) in Les Prix Nobel en 1967, p.212, Stockholm, P. A. Norstedtand Soner.