Contributed by P. Bojarski and A. Kubici, Institute of Physics, University of Gdańsk, Poland. 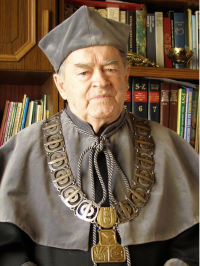 Alfons Kawski (1927-2011) was born in Cekcyn, a small village in the north part of Poland. His scientific activity was connected with Gdańsk Universities: from 1953 to 1961 with the Gdańsk University of Technology, from 1961 to 1970 with Higher Pedagogical School in Gdańsk and then since the foundation of University of Gdańsk with the Institute of Experimental Physics at this university.

Probably the most important result concerned the quantum-mechanical theory of solvatochromic shifts (together with L. Bilot in 1962).Based on his model he developed effective and accurate methods for determination of the lowest excited state dipole moments. These works resulted in international recognition and initiated prolific studies of many research groups. One of such developments concerned the elaboration (together with I. Gryczynski) of the experimental highly precise method of thermochromic shifts of electronic absorption and emission spectra. The same Authors have also shown how to determine spectroscopically the dipole moments in the lowest triplet state. Another important contribution was the elaboration of a model and experimental method for determination of the angle between the transition moments of elongated molecules in uniaxially stretched polymer films, which forms an anisotropic, easily obtainable and well controllable medium(with Z. Gryczynski).

Important results have been obtained by Professor Kawski and coworkers on energy transport and trapping in disordered systems. For example, in the early nineties he verified experimentally for the first time (with P. Bojarski) the effect of intermolecular correlations on energy transport mechanism and the effect of reverse transfer on emission anisotropy in donor-acceptor systems. With M. Alicka and R. Alicki, he proposed a model of rotational depolarization of elongated molecules. Based on the Shpolsky effect (together with P. Bałuk, Ch. Jung, M. Żukowska) he found very interesting results for anthracene and its derivatives. It was found that the mirror symmetry rule collapse in that case which was explained based on quantum mechanical calculations of the Dushinsky effect.

He managed also to perform a complete analysis of the vibrational structure of quasilinear spectra of many compounds in quasicrystal matrices at low temperatures. Before his retirement in 1997 together with his co-workers he obtained and explained spectacular results for the absorption and emission properties of diphenyl polyenes in polyvinyl alcohol films.

The mentioned contributions of Professor Kawski represent only a fraction of his scientific activity. For many years he also served the scientific community as a board member of Journal of Fluorescence and Asian Journal of Spectroscopy. He has formed and left the active scientific school of luminescence spectroscopy. He was a supervisor of 28 doctors. The most outstanding of his pupils are now professors and directors at important scientific institutions. He was also a Vice-Rector of the University of Gdańsk and a Dean of The Faculty of Mathematics and Physics at this University.