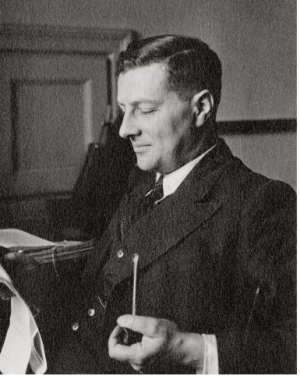 Aleksander Jabłoński (26 February 1898 - 9 September 1980) was a Polish physicist and world-renowned expert in the field of luminescence and atomic optics.

Aleksander Jabloński was born in Voskresenovka in the province of Kursk in Ukraine, where his father Władysław managed land estates of Prince Yusupov. His mother, Marie Louise, neé Bilińska, came from a wealthy land-owning family.

In 1908, Alexander enrolled in high school in Kharkov and began playing the violin at the Kharkov School of Music. After graduating high school in 1916, Jabłoński entered the University of Kharkov, to study physics. At the same time, he continued his musical education in the class of violin. From 1916 to 1918, he was obliged by law to join the Russian army as an engineer (sapper). After military service, he re-entered the University to study physics, also resuming his musical studies in violin at the Conservatory of Kharkov.

In December 1918 he decided to go to Warsaw to join the Polish Army. During military service there he studied physics at the University of Warsaw. His education was once again interrupted in the spring of 1920 by the outbreak of the Polish-Bolshevik war. For his military achievements, he was awarded the Cross of Valour.

After the end of the war (November 1920), Jabloński resumed his studies in physics at the University of Warsaw as well as classes in violin, chamber and orchestral music at the Warsaw Conservatory. Since 1921, he earned his living playing in the orchestra of the Opera in Warsaw as a first violin and simultaneously studied physics at the University of Warsaw. Eventually (1926) Jabłoński left the opera and devoted himself entirely to science. After finishing his studies in 1925, Jabłoński took up an ass is thesis On the influence of the change of the wavelength of excitation light on the fluorescence spectra written under the supervision of Stefan Pienkowski. Then as a fellow of the Rockefeller Foundation, he went to Germany to work with Peter Pringsheim at the Friedrich-Wilhelms-Universität in Berlin, for 9 months and later for six months with Otto Stern in Hamburg. At the end of February 1932, Jabłoński returned to Poland to receive in 1934 habilitation from the University of Warsaw. His thesis was On the influence of intermolecular interactions on the absorption and emission of light.

In April 1938 Jabloński accepted a faculty appointment at the Stefan Batory University at Vilnius, where he developed experimental studies of pressure broadening of atomic spectral lines. These studies were interrupted by the outbreak of World War II. Second World War (1939-1945)

At the outbreak of the WWII Jabłoński fought against German invasion until September 19, when he was placed in an internment camp by Lithuanian authorities. In 1940, he was arrested by Soviets but miraculously avoided the fate of his brother and other Polish officers who were murdered by the Soviets in Katyń. Under an agreement with the Polish government-in-exile, he was released to join the Polish Army which left the Soviet Union for the Middle East. Stationed in Iraq at the end of 1942, he was sent to Scotland where he taught physics at the Polish School of Medicine until the end of war.

In November 1945, Jabloński returned to Poland and resumed his position in the Department of Physics at the University of Warsaw. Soon, he accepted an invitation to the newly founded Nicolaus Copernicus University in Toruń and took the position of a full professor. His first lecture for students of science took place on February 17, 1946. Jabloński led the Physics Department until his retirement in 1968.

In 1922 he married Victoria Gutowska – a pianist he had already met in Kharkov School of Music. The couple had two daughters: Danuta Frąckowiak (1925-2011) – professor of physics and Halina Borecka (1922 -) - professor of botany. Aleksander Jabloński died on September 9, 1980, in Skierniewice (Poland).

His early work at Warsaw included measurements of absorption spectra of solutions and the experimental proof that the intensity distribution in the fluorescence spectra in typical cases is independent of the wavelength of the exciting light. He introduced then the concept of the "luminescent centre", i.e. the system composed of the excited molecule and its closest neighborhood. Using the Franck-Condon principle generalized on the case of such centers, Jabłoński explained the main features of the fluorescence phenomena in liquid solutions.

In 1933 and 1935 he suggested a diagram, commonly known under his name, which made it possible to explain both the kinetics and the spectra of fluorescence, phosphorescence and delayed fluorescence.[1] In this diagram, which now serves as the starting point of all modern textbooks on photochemistry, an essential role is played by a metastable state later identified by G. N. Lewis and M. Kasha and independently by A. N. Terenin as the triplet state. This identification was finally shown to be correct in experiments by C. A. Hutchison, B. W. Mangun, J. H. Van der Waals, and M. S. de Groot in the late 1950's who used electron paramagnetic resonance techniques.

The problem that intrigued Jabłoński for many years was the polarization of photoluminescence of solutions. To explain the experimental facts he distinguished the transition moments in absorption and in emission and analyzed various factors responsible for the depolarization of luminescence. In 1934 Jabłoński proposed a method of the orientation of molecules in anisotropic matrices which now serves as an important tool in studies of linear dichroism and polarization caused by oriented molecules. In 1931 Jabłoński started to work in his second main field of research, namely the pressure broadening of spectral lines. In that year he was the very first person to recognize the analogy between the pressure broadening phenomena and the production of molecular spectra. This analogy was the starting point of the quantum-mechanical pressure broadening theory he developed in the late 1930's and early 1940's. The Jabłoński theory is based on two assumptions: 1. the Born-Oppenheimer approximation for the wave functions of the quasi-molecule formed by the radiating and perturbing atoms during a collision, and 2. the Franck-Condon principle in its quantum-mechanical formulation. Starting from these two assumptions Jabłoński derived by quantum mechanics the quasi-static expression for the intensity distribution in far wings of spectral lines derived earlier on the classical ground by H. Holtsmark, H. G. Kuhn, and H. Margenau. In Vilnius, he initiated the pioneering investigations of the temperature dependence of widths of pressure-broadened spectral lines. The first results were published by him and H. Horodniczy in two communications in "Nature." 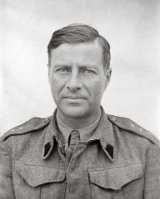 During this extraordinary hard time, after being released from an internment camp, Jabłoński succeeded in preparing an important publication on atomic line shapes which was subsequently published in Physica. In Scotland (1943-45) he returned to scientific work and participated in the Max Born Physical Colloquium at the University of Edinburgh. He devoted his attention to the further extension of his earlier theory of pressure broadening of spectral lines. The most general form of this theory developed at Edinburgh was published in his well-known paper in "Physical Review" in 1945.

In 1950's Jabłoński developed the theory of concentrational quenching and depolarization of photoluminescence. This theory was used as a basis for interpretation of many experiments performed at Toruń by his co-workers in late 1950's and early 1960's. At that time Jabłoński introduced instead of the degree of polarization another quantity, called by him "emission anisotropy", which is now generally preferred and recommended. In 1972 he generalized his earlier theory of the concentration depolarization of fluorescence of dye solutions caused by the energy migration between luminescent molecules. 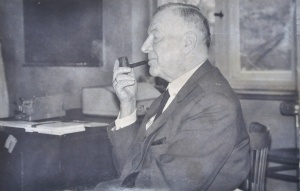 For his outstanding academic achievements, Jabłoński was awarded the title of doctor honoris causa by the University of Windsor, Ontario, Canada (1973), the Nicolaus Copernicus University in Toruń (1973) and the Gdansk University (1975). For his academic achievements and service to the society, the Polish Physical Society awarded him with an honorary membership and the Marian Smoluchowski medal. In 1964, on the 20th anniversary of the People's Republic of Poland, prof. Jabłoński received the 1st Class State Award for outstanding achievements in research on luminescence, in particular for creating a luminescence model.

In 1996/7 Bernard Nikel [6] raised the question if the energy scheme should bear the name of Jabłoński arguing that Francis Perrin proposed such a scheme earlier.

In 1920’ and 30’ there was growing interest in molecular spectroscopy. The main contributors were Jean and Francis Perrin in France and Vavilow and Levshin in the Soviet Union. Francis Perrin in his paper in Ann de Phys (1929) summarized the results of his research on energy scheme, kinetics and polarization of molecular luminescence. Jabłoński published his famous diagram in Nature (1933) which was a step forward with respect to the one described by Perrin because the latter did not explain properly the origin of phosphorescence. Unfortunately Jabłonski did not quote his work. In his habilitation (DSc thesis) Jablonski quotes Perrin’s contribution and mentions that he was not aware of it. In the next paper in Z.Phys. 1935 the paper of Perrin was properly referenced.

The term “Jablonski scheme was used first in Lewis and coauthors in 1941, and in 1944 Lewis and Kasha [7] introduced “Jabłoński Diagram“ to scientific literature.