Beer's Law and Beyond

Figure 1. Beer’s law describes the diminution in intensity of a beam of light as it traverses a medium that contains an absorber, as suggested by the decreasing number of arrows.

When electromagnetic radiation, such as ultraviolet or visible light, passes through a transparent medium that contains an absorber of that illumination, the radiation’s intensity diminishes steadily with passage through the medium. Commonly the radiation is in the form of a collimated beam that impinges perpendicularly on a slab of width [math]L[/math] of the medium, as suggested diagrammatically in Figure 1. One may conjecture that, at any illuminated plane [math]x[/math] within the medium, the decrease in the intensity [math]I[/math] of the radiation with distance would be proportional to the uniform concentration [math]c[/math] of the absorber and to the local intensity of the light at that point; that is

The constant [math]\varepsilon[/math] goes by a variety of names, of which absorptivity, extinction coefficient, absorbancy index and attenuation coefficientare four. Frequently and confusingly, those names, or similar ones, are also given to; [math]\alpha[/math] moreover, the symbol [math]\varepsilon[/math] often replaces [math]\alpha[/math] in equation (2). Further misperception can arise because [math]\varepsilon[/math] has the inverse units of (concentration) [math]\times[/math] (distance) and its numerical value therefore reflects the unit chosen for concentration, which variously may be moles per litre, molecules per cubic metre or one of several kinds of percentage. Absorptivity is generally a function of wavelength and therefore Beer’s law is strictly valid only if the radiation is monochromatic. Furthermore, the law fails at high concentrations or if there is significant light scattering from turbidity.

Both these quantities are dimensionless and therefore independent of the units (of which there are many alternatives) in which the light intensity is measured. Alternative names for [math]A[/math] are absorbancy and optical density and one-tenth of this quantity has been called the transmission loss (in decibels).

is given by a version of equation (3) in which the [math]“c”[/math] in that equation is replaced by the average concentration along the light path, so that

This conclusion is easily rationalized because it is the number of light-absorbing molecules, and not their distribution, that is crucial in abbreviating the light intensity.

A spatial variability of concentration can arise from the illumination itself if the light-absorbing molecules, on capturing the light’s photons, suffer a chemical change. Typically, only a small fraction of photon absorptions lead to chemical transformation, most photons being absorbed harmlessly.

Figure 2. With a photolabile absorber, not only does the light intensity decease, but the concentration increases, across the cuvette.
Though molecular destruction or reorganization may be infrequent, each chemical change causes the absorber concentration to decrease with time and also to become non-uniform. Figure 2 shows the diminution of light intensity along the path length and the concomitant development of a gradient in concentration.

Not only does the absorber concentration become a temporal as well as a spatial variable but, in consequence, the light intensity is forced to follow suit, becoming perturbed away from the exponential spatial dependence predicted classically. Time, which has no relevance to the classical Beer law, becomes a player. Provided the decomposition product does not itself emit or absorb light, the partial derivative

replaces equation (1). Because it involves two independent variables – distance and time – equation(8) is named the bivariate Beer intensity law. The rate of light-induced decomposition would be expected to be proportional both to the local light intensity and to the concentration of absorber, and this expectation is generally realized. Accordingly, the equation,

The recursion relationship [math] B_{k+1}(z)=[z-1]d(zB_{k} (z))/dz[/math] applies but, for computer implementation, the recurrence of the coefficients,

Figures 3 and 4 show typical profiles of absorber concentration and light intensity during an experiment governed by equations (9) and (8). The duality in the interpretation of these diagrams underwrites the essence of the bivariate Beer laws, which could be stated in words as; 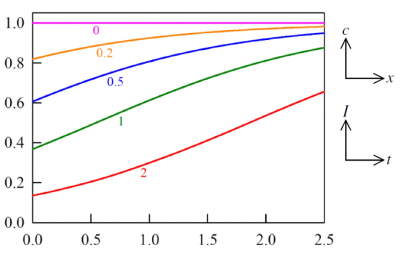 Figure 4. Again, there are two interpretations of these curves, as the small diagrams suggest. Viewed 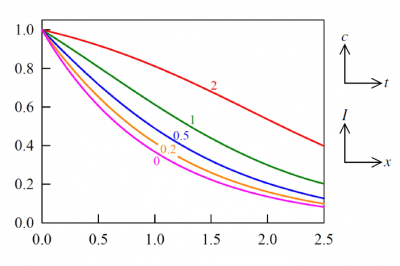 The fraction of absorbed photons that leads to chemical change is known as the quantum yield; it is a key factor in photochemical studies [6, 7]. For a specified photochemical process, the quantum yield is represented by the symbol [math]\varphi[/math], is expressed in units of [math]mol \times ein^{-1}[/math], and is treated as a constant for light of a given wavelength.

Though the two independent variables – distance and time – play analogous roles in the mathematics of the bivariate Beer laws, there are ways in which time is superior in an experimental setting. Absorbance can easily be followed as a function of time, but standard photometric instrumentation does not allow the distance dimension to be scanned in a comparable way. Moreover, the distance scale is limited to [math]0\leq{x}\leq{L}[/math], whereas time is limitless. Hence, studying the time dependence of the absorbance of a solution of a photolabile species can provide, by proxy, information on concentration and thereby on the quantum yield of the photochemical reaction. It has been demonstrated [8] that a plot versus time of the quantity

[8] Parnis, J Mark, and Keith B.Oldham. 2013. “Beyond the Beer-Lambert law: the dependence of absorbance on time in photochemistry.” Journal of Photochemistry and Photobiology, A: Chemistry 2676-10.