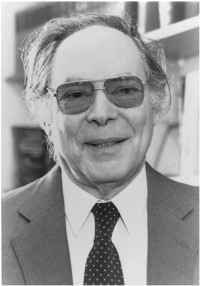 
Early on the morning of July 18, 1997, at home and surrounded by family and friends, Gregorio Weber died of leukemia at the age of 81. His death ended a remarkable scientific career, which began in Buenos Aires, took form in England at Cambridge and Sheffield, and flourished at the University of Illinois at Urbana-Champaign.

Gregorio Weber’s research career, spanning more than half a century, was characterized by an unbroken chain of highly original and important contributions to fluorescence spectroscopy and protein chemistry. Born in Buenos Aires, Argentina, in 1916, Weber completed his M.D. degree at the University of Buenos Aires in 1942. While attending medical school, he worked as a teaching assistant for Bernardo Houssay, who was to receive the Nobel Prize for Physiology and Medicine in 1947. Houssay nominated Gregorio Weber for a British Council Fellowship, which would support his graduate studies at Cambridge University. Travel to En- gland during the war years was an adventure, and his voyage took 44 days in a convoy that endured occasional U-boat attacks. At Cambridge, Malcolm Dixon, the well- known enzymologist, became his thesis advisor and suggested that the young Argentinean investigate the fluorescence of flavins and flavoproteins. Weber soon learned that, during the 1920s and 1930s, fluorescence had already greatly impressed the physicists and to some extent the biologists, but had not drawn much attention from the chemists. For example, a fellow Argentinean, the physicist Gaviola, had already constructed a phase fluorometer in the 1920s and had measured the excited state lifetime of fluorescein with good precision. Weber soon came upon the writings of Francis Perrin (the son of Jean Perrin, who had worked on the translational diffusion of macroscopic particles), on the depolarization of fluorescence by Brownian rotation and on energy transfer. Perrin’s beautifully crafted theories and clarity of thought and expression inspired Weber to apply these methods to biochemistry.

Weber’s original observations were restricted to naturally fluorescent systems such as the flavins—the ultraviolet emission of proteins had not yet been discovered. His Ph.D. thesis, awarded by St. John’s College in Cambridge, titled “Fluorescence of Riboflavin, Diaphorase and Related Sub- stances,” represented the beginnings of a new scientific discipline, namely, the quantitative application of fluorescence spectroscopy to biochemistry. To generalize fluorescence methods to protein systems, he had to first devise a suitable fluorescent molecule that could be chemically linked to proteins and had absorption and emission proper- ties appropriate for the limited instrumentation available in postwar England. After extensive efforts, he synthesized dansyl chloride—a compound destined to be among the most utilized reagents in protein chemistry—and introduced its use as a fluorescence probe of protein hydrodynamics. Concurrently, he extended Perrin’s theory of fluorescence polarization, originally formulated for spherical particles, to encompass the hydrodynamics of nonspherical systems, i.e.,ellipsoids of revolution. To realize his studies, he had to design and build his fluorescence instrumentation. Much of his early work was accomplished using a visual compensation technique—the photomultiplier did not appear until after the war. Consequently, like many of the pioneering spectroscopists, Weber suffered acute eye ailments in later years as a result of excessive exposure to infrared and ultraviolet light.

After earning his Ph.D., Weber stayed at Cambridge as an independent researcher until 1953, when Hans Krebs recruited him for the new Biochemistry Department at Sheffield University. During his years at Sheffield, Weber continued to lay the foundations of modern fluorescence spectroscopy. His pioneering contributions during these early years, and in the years to follow at Urbana-Champaign (he joined the faculty at the University of Illinois at Urbana- Champaign in 1962), included many “firsts,” such as the prediction of intrinsic protein fluorescence due to the aromatic amino acids and the first spectral resolution of these emissions; the first demonstration that both FAD and NADH made internal complexes; the first use of electronic energy transfer in the study of proteins; the first report on aromatic secondary amines, which were strongly fluorescent in apolar solvents, but hardly in water, the most spectacular case being the anilino-naphthalene sulfonates (ANS); the first report on the classical method of measure- ment of the absolute quantum yield of fluorescence; the first description of the use of the fluorescence of small molecules as probes for the viscosity of micelles, with implications for membrane systems, and the general formulation of depolarization by energy transfer that has been universally adopted since, including a description of the “red-edge” effect. Weber devoted a great deal of time and effort to improving the determination of fluorescence lifetimes and developed the “cross-correlation” technique of phase fluorometry that forms the current basis of the phase measurements of life- times—present-day frequency domain lifetime instruments are direct descendants of this design. Indeed, the phase methods developed in his laboratory are now being widely applied to fluorescence microscopy as well as to optical imaging. The fluorescence techniques developed by Weber are also now extensively utilized in clinical chemistry and genome sequencing.

Gregorio Weber’s influence on protein chemistry was also profound. In addition to introducing physical techniques that are arguably the most widely utilized in the field of protein chemistry, Weber was one of the true pioneers of protein dynamics. A study of his papers from the 1960s demonstrates that even then he regarded proteins as highly dynamic molecules. He rejected the view, common at that time after the appearance of the first x-ray structures, that proteins had a unique and rigid conformation. He introduced the use of molecular oxygen to quench fluorescence in aqueous solutions, which led to the detection, for the first time and to the surprise of many, of the existence of fast fluctuations in protein structures on the nanosecond time scale. The impact of this work was shown by the increasing interest in experimental and theoretical work in protein dynamics that followed. Weber’s early view that proteins in solution were “kicking and screaming stochastic models” has, in recent years, been fully verified by both theoretical and experimental studies. In the early 1970s Weber also developed a general approach to the thermodynamics of multiple ligand binding to proteins, introducing the concept of “standard free energy couplings” between pairs of bound ligands. This approach, summarized in a landmark article in Advances in Protein Chemistry in 1975, inspired many protein chemists and enzymologists to consider proteins and allosteric phenomena in terms of the measurable quantities of chemical thermodynamics, as opposed to ad hoc equilibria of hypothetical constructs. In the 1970s, initially in collaboration with H. G. Drickamer, Weber combined fluorescence and hydrostatic pressure methods to the study of molecular complexes and proteins. These observations confirmed the power of fluorescence techniques to resolve questions of structure, and particularly dynamics, at the molecular level. Weber and collaborators, in papers published from 1980 to the present, demonstrated that most proteins made up of subunits can be dissociated by the application of hydrostatic pressure, and opened, in this way, a new method of studying protein-protein interactions. In these studies, quite unexpected properties of protein aggregates were revealed, and a new approach to problems in biology and medicine was opened by these observations. For example, Weber and his collaborators demonstrated the possibility of destroying the infectivity of viruses, without affecting their immunogenic capacity, by subjecting them to hydrostatic pressure, and thus opened the possibility of developing viral vaccines that contain, without covalent modification, all of the antigens present in the original virus.

As a result of his investigations employing the fluorescence techniques in conjunction with perturbations by pres- sure and temperature, Weber presented, in the last few years of his life, a novel way of looking at the folding and association of proteins. His proposal ran contrary to the generally accepted opinion that the properties of the solvent (water) are the determinants of these phenomena. Instead, he proposed that the very large residual entropy of the protein was responsible for many of the observed properties. The correctness of this view, considered iconoclastic and heretical by some, remains to be determined. His approach to this topic, however, demonstrates not only his originality of thought, but also his willingness to critically examine scientific data and commonly held opinions, and to draw his own conclusions. This viewpoint is exemplified in his 1992 book, Protein Interactions, which is dedicated to “those who put doubt above belief.”

Scientific accomplishments earned Gregorio Weber many honors and awards throughout his life, including election to the U.S. National Academy of Sciences, election to the American Academy of Arts and Sciences, election as a corresponding member to the National Academy of Exact Sciences of Argentina, the first National Lecturer of the Biophysical Society, the Rumford Premium of the American Academy of Arts and Sciences (the oldest scientific award in the United States and an award previously won by J. Willard Gibbs, A. A. Michelson, T. Edison, P. Bridgman, E. Fermi, S. Chandrasekhar, H. Bethe, and other highly original thinkers), the ISCO Award for Excellence in Bio- chemical Instrumentation, the first Repligen Award for the Chemistry of Biological Processes (awarded by the American Chemical Society), and the first International Jabłoński Award for Fluorescence Spectroscopy.

The foregoing gives an impression of the scientific in- sight of Gregorio Weber and his important and original contributions both to biofluorescence (a field that in fact did not exist before his efforts) and to protein chemistry. Those privileged to have known and worked with Gregorio Weber, however, can attest to his other striking qualities, including his humanity and simplicity. Gregorio Weber inspired by his character generations of young biophysicists from around the world, demonstrating by example how scientists ought to interact with each other, with courtesy, respect, selflessness, good humor, and generosity. All scientists, whether from other departments at the University of Illinois or from abroad, were welcomed in his laboratory to receive help and advice on fluorescence methods or protein chemistry. Throughout his life, Weber shared freely his laboratory resources as well as his vast knowledge and insight. He became Professor Emeritus in 1986, but continued to conduct an active research program until his death. Throughout his life, Gregorio Weber never deviated from the path of intellectual honesty, rationality, and humanity and never lost the sense of wonder and adventure that science instilled in him during his formative years in Argentina.