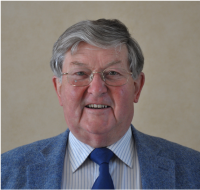 In total 598 research papers, books and reviews and formal reports have been published,354 in the primary refereed literature. 57 Ph.D. students have been supervised; 48 M.Sc. students graduated for the 1-year M.Sc. in Photochemistry [University of Southampton], 51 post-doctoral fellows have spent one or more years carrying out research; and 43 academic visitors.

The main research goal was and is interdisciplinary studies exploiting time-resolved spectroscopic techniques including fluorescence, fluorescence imaging, absorption, diffuse reflectance, and resonance Raman spectroscopies in the study of intra-molecular dynamics of large electronically excited polyatomic molecules, and environmental effects on such molecules, and of particular note in recent times, the synthesis of novel porphyrin-based photosensitisers covalently linked to monoclonal antibody fragments to carry out targeted PDT using both one and two-photon excitation.

A major recent contribution has been in the field of photodynamic therapy of cancer and of microbes., involving the synthesis and separation of water-soluble phthalocyanines, and the characterisation of these, particularly the effect of concentration and pH on the aggregation of the dye [1] using fluorescence imaging techniques[2] to study distribution in tissue, [3].Diffuse reflectance flash photolysis studies on living microbe cells[e.coli, p.gingivalis, candida albicans, s.mutans] containing the sensitisers [4] , showed that for yeasts and G-negative bacteria, a type I electron transfer process occurs in addition to the Type II energy transfer process which is assumed in the PDT field to account for the destruction of cells. Most recently we have studied novel photosensitisers for PDT based upon other phthalocyanines, porphyrazines, and in collaboration with Professor H.A Anderson, FRS, Oxford, porphyrin oligomers which can be excited by both one- and two-photonexcitation [5,6] and demonstrated the utility of two-photon excitation in the sealing of blood vessels in mouse models.[7] Through our start-up company PhotoBiotics we have shown successful targeting of tumour cells and tissues using existing commercial and our own photo-sensitisers bound covalently to monoclonal antibody fragments [8,9].

Early work on photoprocesses in biological systems was on time-resolved fluorescence of fluorescence probes used in biology, eg the dansyl probe, and substituted indoles. Recent work studied the fluorescence of Green Fluorescent Protein, GFP in biological systems. The main contribution of the candidate was in the development of Fluorescence Lifetime Imaging Microscopy, FLIM,[10] and the recognition that changes in the refractive index of the biological medium can influence the fluorescence decay of the probe[11]. FLIM has been used to great effect in the study of the human immune system, in collaboration with Davis, [Imperial Biology, now University of Manchester], and French, [Imperial Physics] in which GFP-tagged MHC [Major Histocompatibilty Complex] is used to investigate the interaction between Natural Killer Cells, and substrate cells [12,13]. Use of fluorescence of molecular rotors to study micro-viscosity in live cells viscosity has been reported [14].

David Phillips was involved from early stages in the development of time-resolved Raman and infra-red spectroscopy on short-lived transients, where considerable structural information is yielded in comparison with existing transient electronic absorption and emission measurements. Applied to molecules in which intramolecular charge-transfer can occur, typified by dimethylaminobenzonitrile [DMABN] and its derivatives, David Phillips group produced the first convincing, and now largely accepted evidence that the ICT state has a partially twisted geometry in that the dimethylamino group twists out of the plane of the benzene ring, and also undergoes some pyramidalisation.[15] They were also able to observe clearly a hydrogen-bonded charge-transfer state of dimethylaminobenzonitrile in methanol solution by the use of time-resolved infra-red spectroscopy.[16]

David Phillips also carried out substantial studies on gas-phase photochemistry and photophysics, of aromatic molecules, including supersonic jet spectroscopy [17-20]; and on photo-processes in synthetic polymers [21,22]. David Phillips also made a major contribution to the development of time-correlated single photon counting.[23]

David Phillips has throughout his career devoted himself to the public appreciation of science, lecturing to the young and lay public, and has reached live lecture audiences in excess of 250,000, as well as TV, and radio presentations in many countries.