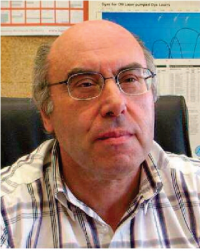 He was Adjunct President of the Pedagogical Council of IST (1990-1992) and Director of the Centro de Química-Física Molecular (1992-2012). He was also General Secretary (1995-1997), Vice President (2001-2003), and President (2004-2006) of the Portuguese Chemical Society. He received scientific awards from "Associação Portuguesa de Doutorados em França" (APDF, 2006), "Estímulo à Excelência" (2007), "UTL/Santander Totta" (honourable mention, 2008), and "UTL/Santander Totta" (2012). He was responsible for 11 National Scientific Projects (Fundação para a Ciência e a Tecnologia, FCT), 2 Industrial Projects (Solvay and EDP), and participated in 2 European Projects. He was a consultant for Procter & Gamble in the block copolymers area.

He was National Coordinator of the European Network "ERA-Chemistry" (2005-2011) and of the Bilateral FCT Projects (2007-2010). He has supervised 10 Ph.D. students, and 2 post-doc students. He was project evaluator for FCT, ADI, EU, NSF (USA) e NSERC (Canada). He has delivered several oral presentations in international scientific meetings, such as the "IUPAC Symposium on Photochemistry" (1992, 2009), the "88th Canadian Chemistry Conference and Exhibition", the "Annual Meeting of the Fast Reactions in Solutions Discussion Group of the Royal Society of Chemistry" (2001), the "2nd Mediterranean Meeting on Photochemistry" (2003), and the "36ª Annual Meeting of the SBQ" (2013).

He organized the "9th International Conference on Methods and Applications of Fluorescence: Spectroscopy, Imaging and Probes", Lisboa (2005) and the "II Jornadas Ibéricas de Fotoquímica" Faro (2007). He has co-authored 180 scientific papers in ISI-indexed journals, with over 3000 citations, corresponding to an h citation index of 31 (ISI), and 6 book chapters. He holds 2 International Patents (USA, Brazil, EU, Canada, etc.) and 3 National Patents. He his member of the editorial board of "e-Journal of Chemistry" and of "Journal of Colloid Science and Biotechnology". His current scientific interests focus on Polymers, Colloids, Hybrid Materials, Optical Microscopy, Biphotonic Absorption, Photophysics and Photochemistry.