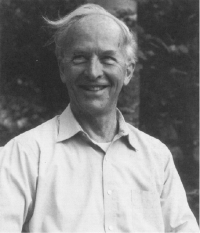 Michael Kasha (1920-2013) was born December 6, 1920, of Ukrainian immigrant parents who had settled in a Ukrainian community in Elizabeth, New Jersey. In 1948, he was married to Lilli Cohn, a native of Danzig. They have one son, Nicolas. Michael Kasha received his B.S. Chemistry degree from the University of Michigan in 1943. He then went to the University of California and received his Ph.D. in 1945 as the last graduate student to complete his work under G. N. Lewis, on the triplet states of organic molecules. After postdoctoral research in Berkeley, Chicago, and England, he was appointed Professor of Physical Chemistry at Florida State University in 1951. In 1960 he founded the Institute of Molecular Biophysics as an interdisciplinary research facility featuring, especially, research interaction between chemical physics and molecular biology. Michael Kasha has consistently worked on research extending the applications of molecular electronic theory and spectroscopic interpretation to biomolecular systems. His contributions cover fundamental orbital and spin characterization of molecular electronic states; molecular energy transfer; the molecular exciton model applied to molecular dimers, polymers, and lamellar structures; the role of singlet molecular oxygen in chemistry and biology; proton-transfer phenomena in organic and biological systems, especially the effect of hydration on proton-relay systems; the proton-transfer laser; and currently, competitive excitation of twisted-intramolecular-charge-transfer and proton-transfer states. Kasha was elected a Fellow of the American Academy of Arts and Sciences in 1963 and to membership of the National Academy of Sciences in 197 1. From 1979 to 1984, he was a member of the National Science Board. He was elected a corresponding member of the Brazilian Academy of Sciences and a foreign member of the Ukrainian SSR Academy of Sciences. Since 1962 he has been Robert 0. Lawton Distinguished Professor in Florida State University. In 1990 he received the Porter Metal.

Michael Kasha has made his main research career in molecular electronic spectroscopic phenomenology. During his research career of nearly 50 years, he has contributed a stream of key discoveries which have had an enormous influence on the development of molecular electronic spectroscopy and molecular photochemistry, with countless applications to organic chemistry, biophysics, and technology. The phenomena, concepts, language, and theoretical treatments developed in his laboratory could literally be described as the backbone of molecular electronic phenomenology as it has evolved in the second half of the 20th century.

Kasha’s papers in 1944 and 1945 with G. N. Lewis on the phosphorescence and the triplet states of organic molecules together with the papers with Calvin on magnetic measurements of phosphorescent molecules established beyond doubt that the phosphorescence emission results from a triplet to ground-state transition of organic molecules. His study of radiationless processes in excited states led to the formulation of what are known as Kasha’s Rules (the emitting state of a given multiplicity is the lowest state in the manifold of excited states). Kasha showed that heavy-atom substitution in organic molecules has the theoretically expected Z-effect on intersystem crossing. He also introduced a new effect, the “external heavy-atom effect” or collisional perturbation of spin-orbital coupling, showing that singlet-triplet transitions of organic molecules could be induced by a heavyatom-containing solvent. This widely used phenomenon has been named the Kasha Effect.

Kasha and his students have published an extensive series of papers on molecular exciton theory applied to molecular aggregates. This work has been greatly extended in recent years to include hydrogen-bonded dimers, simple polymers, and lamellar molecular arrays. Extensive applications to biophysical problems have also been made.

One of the main currents of new development in Kasha’s laboratory lies in studying the electronic consequences of excited-state proton transfer. One of the most exciting discoveries in his laboratory was the observation in 1969 of biprotonic phototautomerism in H-bonded base pairs (7-azaindole). Recently this work has been greatly extended to the observation of five distinct types of intramolecular proton transfer, in addition to the well-known previous cases of intermolecular proton transfer to solvent. Taken together, these new proton-transfer researches offer a greatly expanded range of observable spectroscopic phenomena for the study of the normal and tautomeric forms of a molecule and their dynamic relations. Applications include the mechanisms of proton transport in membranes, and a new highly efficient proton-transfer laser published by Kasha and his colleagues in recent years.

Michael Kasha is known for the diversity of his interests aside from physical chemistry. On the FSU Campus he was director of the Institute of Molecular Biophysics for 20 years. Kasha holds patents in acoustical and mechanical engineering and is active in design work. His work on string-soundboard instruments is widely known and covers instruments from guitars, to the violin family, harp, harpsichord, and piano. His interest in flower color genetics led him to a treatment of Mendelian genetics by tensor matrix product algebra, to a long series of flower pigment research culminating in a genetic synthesis scheme for producing blue flowers, and ultimately to the development of the proton-transfer laser based on the flavonol copigment.

Michael Kasha has also had a lifelong interest in technical photography and is developing an archeological art project involving various photo-silk-screen printing techniques. In addition to the impact of Kasha’s distinguished scientific publications, an equally important contribution to science is the long series of inspired scientists that he has educated in his 39 years at Florida State University. The penetrating analysis, search for novelty, and enthusiasm generated in his laboratory have been amply transmitted to his large group of productive students and associates now distributed in key positions in universities and in industrial and government laboratories in this country and abroad.