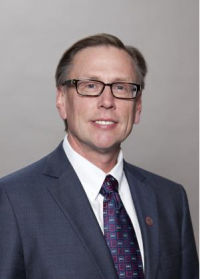 Kevin D. Belfield received the B.S. degree in Chemistry from Rochester Institute of Technology in 1982 and, after spending one year at Bristol-Myers Pharmaceutical Co. in Syracuse (1982-83), the Ph.D. degree in Chemistry from Syracuse University in 1988 (under the mentorship of John E. Baldwin). He then worked as a Senior Chemist at Ciba-Geigy Corp. before performing postdoctoral research at SUNY College of Environmental and Forestry (with Israel Cabasso) and at Harvard University (with William von E. Doering). Subsequently, Kevin was a member of the faculty at the University of Detroit Mercy and Graduate Coordinator. While at the University of Detroit Mercy, Belfield was an AFOSR Summer Faculty Fellow in 1997 and 1998. Prior to joining NJIT he served as Pegasus Professor and Chair of the Department of Chemistry at the University of Central Florida (1998-2014).

In 2010, Dr. Belfield was inducted into the National Commission of Cooperative Education (NCCE) Co-op Hall of Fame. In 2013, he was elected a Fellow of the American Association for the Advancement of Science (AAAS) and awarded a Chang Jiang Chaired Professorship by the Chinese Ministry of Education at Shaansi Normal University in Xi’an, China.

Belfield has served as PI or co-PI on over 45 grants from federal, foundation, and corporate agencies. Kevin has over 250 publications, holds over a dozen US patents, and serves on several editorial advisory boards of scientific journals. Dr. Belfield is a pioneer in two-photon photochemistry and organic photonic materials. His research interests range from developing contrast agents for early cancer detection and new paradigms for photodynamic cancer therapy to ultrafast photophysics and 3D high density optical data storage.

Since the Coulomb potential V is invariant under translations Uˆ(a)riUˆ(a) † = ri + a (Uˆ(a)V Uˆ(a) † = V ), then the eigenfunctions of the translation–invariant Hamiltonian operator (1) are not square integrable. For that reason we first separate the motion of the center of mass by means of a linear coordinate transformation